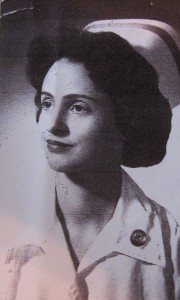 Holocaust survivor and nurse Margie Oppenheimer was born on May 9, 1924, in Oelde, Germany.   On November 9, 1938, she and her family were attacked in a pogrom known as “Kristallnacht” (Night of the Broken Glass) and in December 1941 deported to the Jewish ghetto in Riga, Latvia. Over the next several years, Oppenheimer would spend time in 5 concentration camps: Sloka (Latvia), Riga-Kaiserwald (Lativia), Bruss-Sophienwalde (Poland), Stutthof (Danzig) and Goddentow (Germany).

In a 1995 interview, Oppenheimer described her early experiences working as a nurse in Riga:

It was in December 1941 that I was deported from my home town of Oelde, Germany to the Riga Ghetto in Latvia. We arrived on 15 December. I worked as a nurse at first, very difficult because we had nothing to give the patients – no dressings, no medication, nothing. And the majority of people were frostbitten. Fingers and toes were lost. I remember this nine-year-old boy, all his toes were black with gangrene, and I just cut them off with scissors. He didn’t feel a thing and he made it. Another time this lady had gangrene right up to her knees and she was dying. I called the doctor. I started laughing hysterically; it was a reaction that I cannot define. That was the night when I said, ‘I am not going to work as nurse any more.’

Nevertheless, after being freed from the Goddentow concentration camp, Oppenheimer continued working as a nurse and eventually moved to the United States. According to the Illinois Board of Nursing, she was a Licensed Practical Nurse in Skokie, Illinois from April 1962 until January 1991.