Anita Thigpen was born in Haskell, Texas on May 5, 1952. Her father, Joseph Eltidge Thigpen, was a family physician and Anita sometimes accompanied him on house calls. In September 1966, at age 14, she went on her first date with 16-year-old Rick Perry at a high school football game in the neighboring town of Paint Creek, Texas. They were married 16 years later in November 1982. 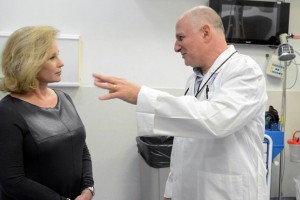 Anita Thigpen began her nursing career as a registered nurse at Haskell Memorial Hospital and eventually rose to the position of Director of Nursing and helped establish a rape crisis program at the hospital. She also worked a nursing instructor. She eventually left the nursing profession after her husband was elected Texas Agriculture Commissioner in November 1990. She later worked for public relations and lobbying firms on healthcare issues and in 2003 was hired as an outreach director and fundraiser for the Texas Association Against Sexual Assault.

In 2008 interview with Teresa McUsic of Nurse.com, Anita Perry described what drew her to the nursing profession and some of her thoughts on her career as nurse.

Q: What drew you to the nursing profession?

A: I was fortunate to grow up around nursing. My father, Joe E. Thigpen, MD, was a family physician in the small West Texas town of Haskell. Nurses were my father’s partners in health care. They were a tight team built with experience, knowledge and trust. I remember listening to their conversations and watching the graceful approach the nurses took with patients and their families. And I learned the greatest lesson in the halls of that hospital: Nurses not only dispense information and medication to their patients, but also physical and emotional comfort.

Q: Talk about some of the rewards and frustrations you felt during your 17-year nursing career.

A: The rewards far outnumbered the frustrations. The neonatal intensive care unit and administration were my favorite positions; and the thing I would enjoy the most in the future is teaching.

I often say that nurses are the ground soldiers of health care. I truly believe that. Nursing may not always be as glamorous as a drama on television, but to the patients we serve, the time we spend with them is top priority.